UCLA’s own Hoffman2 cluster gives researchers access to huge amounts of computational resources (Over 20,000 cores and 50TB of memory!). There are currently over 3,000 registered users that keep the server quite busy, often near 100% according to the reported statistics at the time of writing.

So how do we use the cluster? A typical workflow would be:

When we submit the script, we have to specify how much time and memory we think the job will need. Hoffman2 uses the Univa Grid Engine for job scheduling, so a job submission command might look like:

Then you wait… When the job runs, the scheduler will reserve the amount of resources you requested for your script to run. So in the above example, we get 1 core and 8 GB RAM for 24 hours all to ourselves.

Your job will be mercilessly killed if you exceed the memory or time you requested, so it’s common practice to overestimate how much resources you need. Overestimation of time is not a huge deal since resources will be freed when your job finishes, but it may cause your job to sit on the queue for longer. On the other hand, overestimation of memory (or even worse, cores) makes these resources unavailable for other tasks for the duration of your job.

How much are we overestimating?

I pulled accounting data from Hoffman2 (which is read-accessible to all users) that documents every job run on the cluster, separated by month. We’ll take a look into March of 2019.

The accounting data provides quite a few metrics for each job. We can see the amount of time and memory requested. We can also see how much time and memory was actually used by the job. Let’s take a look at the differences in requested and utilized resources across all the jobs.

I calculated the memory overestimation of a job by subtracting the peak memory usage from the total memory requested (sometimes this is negative, indicating that a job went over the limit, but we only looked at positive values here). For this visualization, I also removed around 1,800 outlier jobs that had over 50 GB of unused memory (a few had 256 GB overestimated).

Overall, we can observe a mean of roughly 5 GB overestimated per job and mode of 2 GB after rounding. For reference, jobs use 2.6 GB of memory on average. It should be noted that failed jobs can exaggerate the impact of memory overestimation, since they typically die fairly quickly and do not hold up the resources for that long. Roughly three percent of jobs had non-zero exit status, which usually indicates that the job failed. When I remove these jobs in these analyses, the above findings do not change.

Jobs vary significantly in how much memory they need. If a job requires 100GB of memory and 1GB is unused, it is much less of a problem than if a job only needing a few megabytes requests 1GB. With this is mind, I calculated the proportion of requested memory each job is actually using. I restricted the data to jobs that had zero-exit status and had memory usage less than or equal to the amount requested. 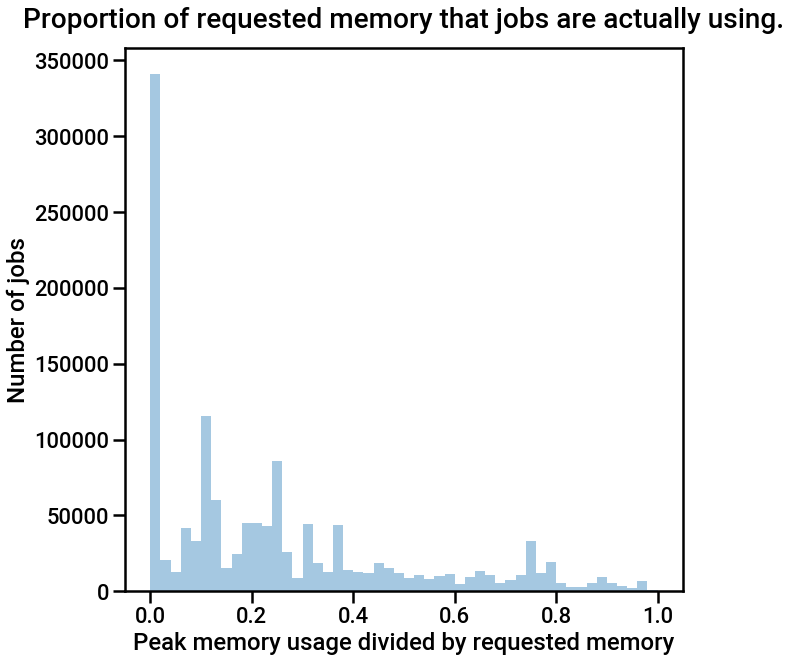 Update - While looking at my own jobs, I noticed that actual resource usage for interactive nodes is reported as zero for both time and memory. I’m not sure if this problem is limited to interactive nodes, but even if we remove the all the jobs that report zero percent memory usage, most jobs still only use around 10% of their requested memory (average around 32%). Hopefully this bug is fixed in newer versions of UGE (at time time of writing, Hoffman2 is running UGE 8.0.1 and the latest available is 8.5.X).

Jobs tend to use a small fraction of the memory they are allocated. How are we doing on time?

Similarly, I calculated time ovestimation as the difference between the requested and actual duration of each job. Again, I restricted the data to jobs that successfully ran (non-zero exit statuses) and I did not show about one percent of outlier jobs that have a difference over 100 hours. 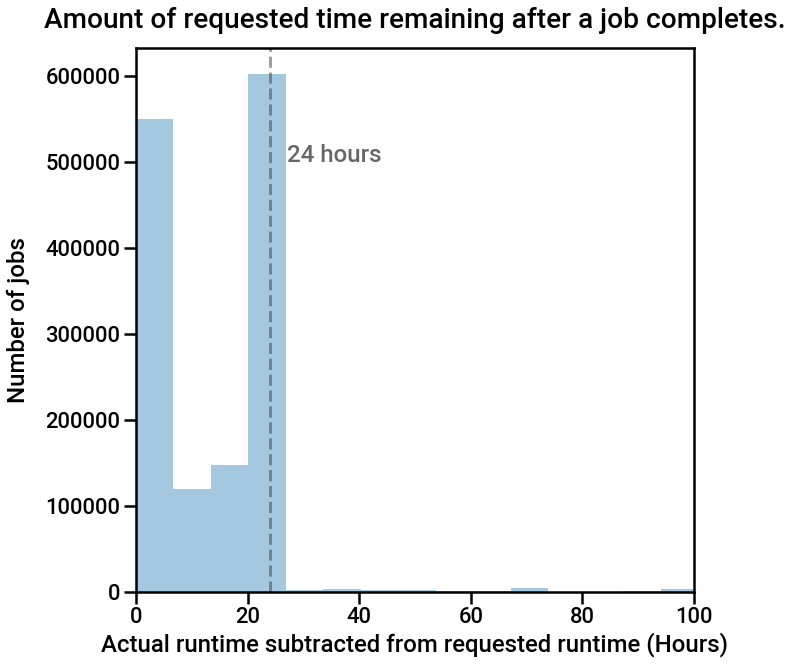 Here, we can see a bimodal distribution. There is a peak around zero indicating that many jobs are great at estimating how much time they need, even when I removed jobs that are killed for running too long. The second peak at 23 hours (indicated by the dotted gray line) indicates that many jobs request about a day too much. For reference, the average actual runtime of a job was around 1.5 hours. This behavior is a consequence of the resource limits on shared resources in Hoffman2 (you can request a maximum of one day if you are using a node available to all users). As stated previously, time overestimation does not place a huge burden on the server, since jobs will exit whenever they actually complete.

To summarize, we find:

Resource overestimation is excessive. What can we do?

Keep track of what your jobs need. Hoffman2 provides some tips for memory requests. In short, you can check your jobs resource usage in the current month with the following command:

where USER is your server username and PATTERN is a Regex to filter for job names. If you leave PATTERN empty (but still with the -j flag) you’ll see all jobs submitted this month. You’ll get a lot of information (not the requested resource amounts for some reason), so you can filter for just the name, runtime, and peak memory usage with the following command:

To summarize these stats, I wrote a script that will describe memory requests and usage for a particular type of job over a specified month (previous month by default and currently does not work for current month). The output might look like this:

There’s no perfect answer to how much extra memory you should give your job to avoid getting it killed, but if you see that at most your jobs are using 13 GB of RAM, you might not need to request 32GB. Using 85% of the requested memory seems like a reasonable guideline, but anything above the current trends we’re seeing around zero percent would make Hoffman2 more efficient. Your jobs will probably spend less time in the queue!